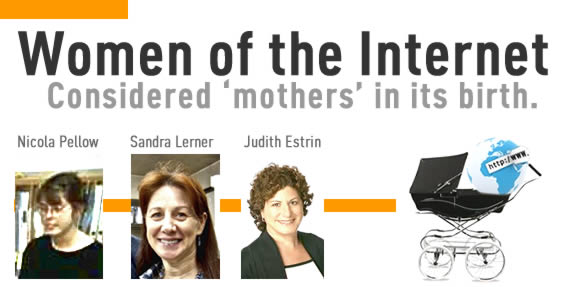 An interesting topic was raised in our class forums today. The subject matter was concerned with the how (for the most part) we as a society tend to think of the ‘Founding Fathers’ in the development of the internet.

As an awareness factor, online social media has many articles that reference Vinton Cerf and Tim Berners-Lee, yet the contribution by women towards the development of the Internet goes mostly unheralded.

Being a male, I confess I had not even considered the relative concept that others (namely women) had contributed in what has historically been perceived as a ‘male dominated’ field of development.

I was presently surprised (and impressed) to discover more information about this subject matter from the likes of Wikipedia’s entry titled Women Internet Pioneers.

Today, the Internet is so much more than what the ‘founding mothers & fathers’ created. Right now, the decedents of a diverse humanity publish, broadcast, broaden, develop and improve the components far beyond the sum of its parts.

The Internet today transcends race, sex, religion, age and politics as we all contribute to its ongoing development. I feel tremendously humbled participating in a world with so much potential greatness.